The MitSyn Score Player and Editor plays (synthesizes digital audio) from “scores” and facilitates the editing of those scores. Topics on this page include (click to view):

MitSyn scores are conceptually like scrolls on which are placed the various types of score notations. For musicians a MitSyn score is in concept somewhere between the very low-level score represented by a player piano roll and the much higher-level traditional musical score which is very symbolic and context dependent. MitSyn scores are more flexible than standard music scores, and are applicable to the synthesis of digital waveforms for many other types of situations.

The MitSyn Score Player and Editor may be used to create and edit such scores. It also supports the importing of score data from standard MIDI files (File→Open). MIDI files for musical scores are popular items on many Web sites.

The MitSyn Score Player and Editor includes features which are useful for singers learning their part in multi-part choral music. It can synthesize/play from scores while allowing the user to adjust parameters such as the tempo and relative amplitude of each voice. It imports and plays scores in the popular standard MIDI music file format, and creates and edits scores in its native file format.

The Player may be used to play in the background while working on other tasks, e.g., e-mail correspondence, or more actively while learning difficult passages. In the latter active involvement mode one is usually reading from one’s own copy of the score, using the shortcut keys to pause and restart and to repeat difficult passages, and perhaps using the voicing controls to emphasize/de-emphasize particular parts.

A screenshot of the main window is show below. This screenshot is also showing the Play, Find, and Bookmarks toolbars (of many). 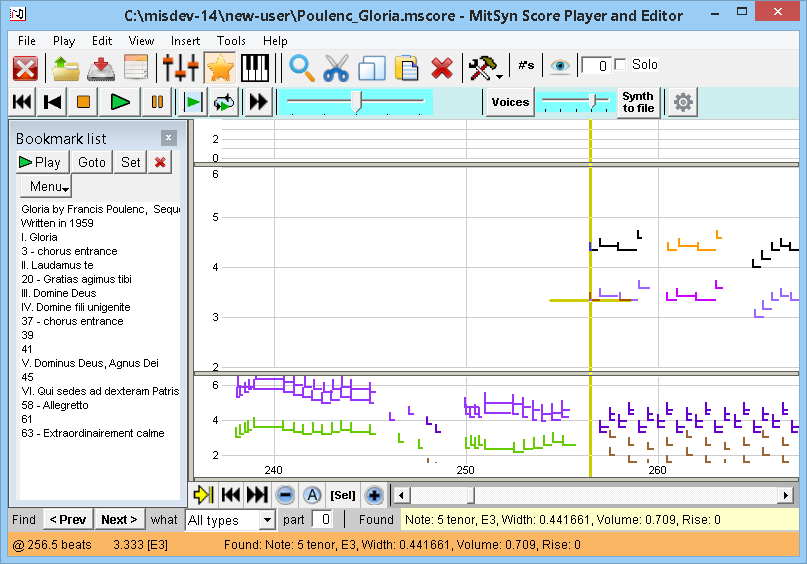 A primary component of usage information consists of help balloons called “Tooltips” which popup when the mouse cursor is hovered over each control (button, slider, scroll bar, textbox, music keyboard, etc.) of the many toolbars. To learn what any control does hover the mouse cursor over the item, and a tooltip will popup which describes the function of that item. If a keyboard shortcut is assigned to the command activated by the control the key(s) will also be shown at the end of the tooltip.

To play a file open a MitSyn score or a MIDI sequence file in the MitSyn Score Player/Editor (File menu, Open command, usually denoted as File→Open), and then click the Play button. Playing may be controlled using these basic controls on the “player toolbar”.

These player “transport control” buttons also have associated shortcut keys, and the particular key is shown in parentheses in the Tooltip for that button. These buttons may be clicked, or the equivalent shortcut key pressed, to restart playing at desired locations or to facilitate the repetitive playing of difficult passages. When learning parts it is usually easier to use the shortcut keys for these commands, rather than using the mouse to point to and then click the desired button.

An augmented listing of the function and tooltip shown for each button or control is as follows, listed as shown from left to right.

The next controls and readouts shown on the toolbar areas follows:

In addition to Fast Forward Play there are many other ways of quickly jumping around in a score. “Bookmarks” may be easily added to scores to facilitate the quick return to desired locations. Additional navigation techniques are discussed at Finding Locations or Items in a Score.

Most of the first controls in the top toolbar are the usual ones. The first (left arrow) button is the Go Back button, and the next button is the usual File→Open button which is handy for switching to a different score. The Zoom buttons provide quick adjustment of the view — see the tooltips on the buttons for a full explanation.

The scroll bar below the score view shows where the current view is located within the whole score. A fast way to move to a different section of the score is to simply drag the slider (sometimes called the “thumb”) in the scroll bar.

Clicking anywhere on the score view sets the cursor at that position, and double-clicking starts playing there. To jump forward quickly in a score drag the slider in the score scroll bar or use the paging keys to move the view to the desired region, and then click at the desired position. 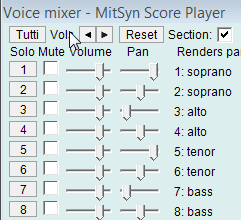 Clicking the Voice Mixer button on the Player toolbar (or Toolbars→Voice Mixer) brings up the voice mixer toolbar, which may be used to adjust attributes of each voice such as the its volume, position, and sound. These attributes are often useful while learning a part to either emphasize or de-emphasize one’s own part in the mix. Depending on data in the score, the part number (note class) in the score which the voice is rendering often includes a name for the part assigned to the voice, e.g., tenor or piano.

The Volume controls set the volume for each voice, and the Pan controls set the left to right position for each voice. These controls can also be set by “commands” in the score as it is being played, so if you adjust them and they subsequently are changed to different values it happened because they are being set by the score. If you wish to remove such score items search the score for commands (do a “Find” command with a find filter item type of “command”) and delete those score commands which begin with “SetNPan” and/or “SetNVol”.

Clicking a Solo button mutes all voices except the chosen voice. Individual voices may be turned on and off (muted) by clicking their Mute checkbox. Another technique is to set the instrument rendering the selected voice to a brilliant sounding instrument.

Clicking the Tutti button turns on (un-mutes) all voices. Clicking a “Vols” arrow increases or decreases the volumes of all the voices, and the “Reset” button resets all the mixer controls to the same nominal values (this is useful to get back the “usual” mixer settings after grossly distorting the mix for some particular purpose).

The current settings of the Voice Mixer are also reflected in the visual display, i.e., only speaking (not muted) voices are shown. Using the aural and visual renderings together is often helpful in the process of debugging a score, i.e., finding and fixing wrong notes in a score. Another way to visually separate individual parts is to assign them to different view rows (View→Setup View Layout (Part assignments, etc)).

The part that a voice renders, and the “instrument” assigned to a voice may also be easily changed. Clicking the Voices toolbar button (or Play→Assign Voices (instrumentation)) brings up the following dialog box. The most common application of this dialog is to simply change the instrument assigned to each voice.

If you wish to change the number of voices adjust the Change To field and then click the associated button. Then change the attributes for any voice by double-clicking on a particular voice which brings up a dialog (shown to the right).

The assignment of voices to parts in the score (note classes), and the assignment of instrument names to voices, is kept with each score. Also kept with each score is the name of an “Instrument Definition database” file which assigns attributes to each instrument name. It is easy to add instruments. For example, you could record yourself as a sound sample and use that as an instrument. Instrument definition is really of more interest to the sound craftsman, however, and not usually fussed with for part learning purposes.

As an aid for fast navigation it is often useful to put bookmarks in a score at places of interest. Scores imported from MIDI files will have MIDI markers imported as bookmarks. The Bookmark List sidebar presents commands for using bookmarks and a list of the current bookmarks. Set is used to set a bookmark at the current cursor location. Goto moves to cursor to the location of the bookmark currently selected in the list, and the Play button moves the cursor and starts playing from the selected bookmark. Double-clicking on a list entry also starts playing from the selected bookmark.

The Score Player (synthesizer) can make uncompressed digital audio files in the WAV file format, from which any audio CD burning software such as Windows Media Player, iTunes, Nero, Roxio, etc., can be used to burn audio CDs. Such files can also be loaded into most MP3 players.

The Play→Synthesize to file command or “Synth to file” button on the Player toolbar is used to create a digital audio file. You might first check the Score Player options (Play→Player options) to select your desired synthesis sampling rate. The standard sampling rate for audio CDs is 44100 samples per second, but you probably won’t notice any difference if you use half that. After starting a play to file run the write process continues until another command such as Pause is given, or the end of the score is reached. If you to choose to play audio while saving you may use the controls on the Voice Mixer to adjust the mix during the run. If you choose not to play audio while saving the process usually happens much faster since it need not be slowed down to real time for you to audition.

The overall tuning is normally such that A4 (A above middle C) is at 440 Hz, although this may be adjusted using the Play→Player Options command. Individual voices may be tuned using the Transpose attribute in the Voicing Assignment dialog. 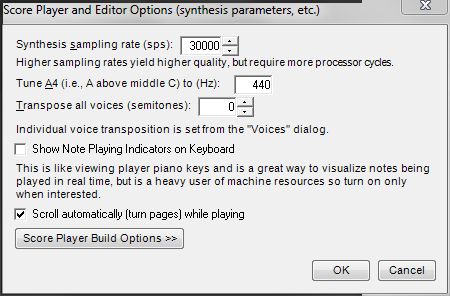 The synthesis sampling rate may also be adjusted using Player Options. A higher sampling rate yields higher quality sound, but will result in gaps in the sound if your machine is not fast enough synthesize in real time. Decreasing the number of voices allows a higher sampling rate to be achieved. However, recent vintage machines are so fast that this should never be necessary.

Many scores may be obtained by using the MITSYN Score Player/Editor to import them from standard MIDI sequence files (Score Editor File→Open command). MIDI files for musical scores are popular items on many Web sites, searching (e.g., Google) for “MIDI choral music” is a good source. Good collections of choral music MIDI files may be found at www.GASilvis.net, and John’s Midi File Choral Music.

Entering a new score from scratch is moderately easily accomplished thanks to the syntheziser keyboard discussed below which facilitates note entry by simply pressing keys on that keyboard.

The implementation of the player does not require any special purpose hardware other than the usual sound putput capability. In particular, no MIDI hardware or support is required in as much as the sound samples are synthesized directly by the PC’s CPU chip. The implication of this is that a faster CPU allows the playing of more voices and at a higher quality (i.e., sampling rate). A 1 GHz CPU can easily synthesize up to 40 simple voices with high quality.