The MitSyn Numeric Array Editor supports the creation/viewing/editing of arrays of numeric values. As such its primary use is the editing or preparation of such data used by the other MitSyn tools. Some of the many uses of such numeric arrays are shown below, which demonstrate the support for such applications included in the Editor. Some of these applications are as follows:

Segments of waveform files selected using the Audio Editor may be edited using the MitSyn Numeric Array Editor  (Edit » Edit selection using Numeric Array Editor command of the Audio editor). Using this tool individual sample values may be easily changed, whole segments may be set to zero or multiplied by some factor, segments may be ramped up and down, sample values may be drawn in with the mouse, etc.

Each channel of the waveform segment becomes one row of the numeric array.

The File→Save As commands may be used to save such segments as numeric array files in various file formats. This is the operation used to extract sounds from waveform files and make them into “wavetable” files (one of many applications of the MitSyn numeric array file format).

“Wavetables” are segments of signal samples often used in the synthesis of sounds. Two typical uses are as segments to be replicated once, and as the definition of the shape a single cycle to be repeatedly scanned by an oscillator to generate a periodic waveform. The first form was shown just above as “Waveform segment editing”.

Rows of numeric arrays may be used as “wavetables” by oscillators. This means that the row of numeric values is used to represent one cycle of the oscillator’s output. The row is repeatedly scanned at the oscillator’s current fundamental frequency to generate a waveform. In this usage a “weighted sinusoidal harmonic” representation is convenient, and  the Numeric Array Editor may be used to adjust harmonic weights by ear, i.e., by clicking on bars which control harmonic weights while listening the result.

Another common use of numeric array data is to specify the shape of “mapping functions”, i.e., functions which map from an x (domain) value into a y (range) value. In sound synthesis such maps are commonly used by “envelope generators” which are used to specify amplitude shapes. Data so used are often just drawn in directly using the mouse (the “pencil” drawing tool in the toolbar). 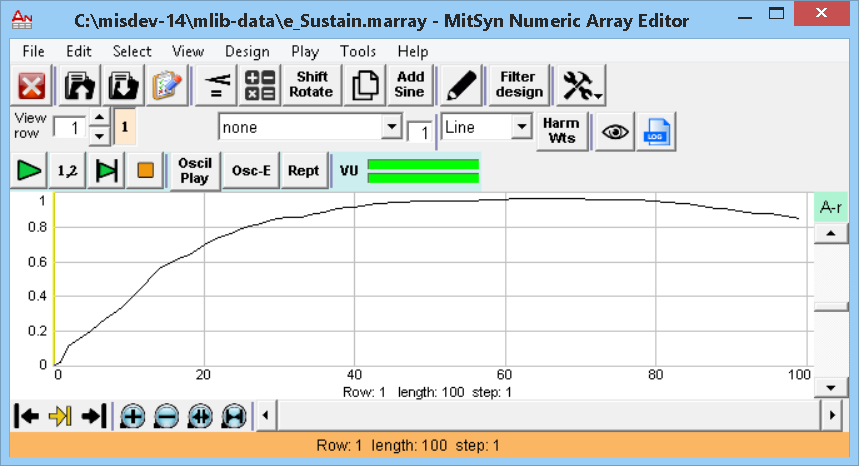 Another application of an array of numbers is as the coefficients of an FIR or “finite impulse response” filter. Such filters are used in stream processing blocks to realize arbitrary linear phase bandpass filtering. The Numeric Array Editor includes an “optimum FIR filter” design algorithm which supports the design of such filter coefficient vectors. 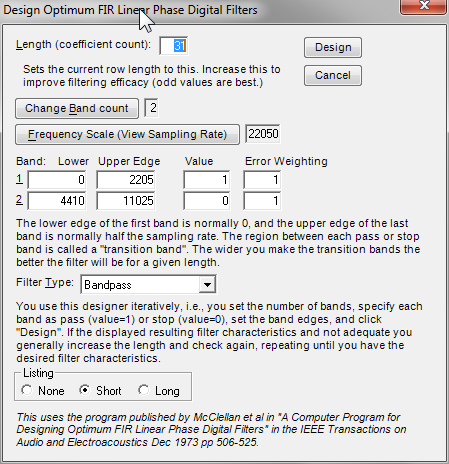